In a conversation with various folks around ontologies for news I went a bit tangential and tried to model news as I thought it should be rather than how it is. Which was probably not helpful. And left me with a bee in my bonnet. So...

Some events in the life of Chris Huhne

Some of the events went on to become part of other storylines. For a brief while Mr Huhne's driving ban for using a mobile phone at the wheel became part of a "Government makes a million a month from drivers using mobiles" story (at least for the Daily Mail), the collapse of the first trial of Ms Pryce became a story about failures in the trial by jury system and the result of the by election became part of a story about the rise of minority parties in austerity hit Europe.

Anyway this list of events is as partial as any other. Many more things happened (in public and in private) and some of the events listed were really lots of little events bundled up into something bigger. But that's the trouble with events: they quickly go fractal because everything is one. As Dan said, "it's good to think about events but it's good to stop thinking about them too." I'm not quite there yet.

Anyway, boilings things down further to fit in a picture:

For every event there's a fairly obvious model with times, locations, people, organisations, factors and products. And (mostly) the facts expressed around events are agreed on across journalistic outlets.

The more interesting part (for me) is the dependencies and correlations that exist between events because why is always the most interesting question and because the most interesting answer. Getting the Daily Mail and The Guardian to agree that austerity is happening is relatively easy, getting them to agree on why, and on that basis what should happen next, much more difficult.

The same picture this time with arrows. The arrows aren't meant to represent "causality"; the fact that Mr Huhne was elected did not cause him to resign. But without him being elected he couldn't have resigned so there's some connection there. Lets say "influence":

The simplest model for news would bump most of the assertions (who, where, when etc.) to the events and hang articles off them, stitched together with predicates like depicts, reports or analyses. But whilst news organisations make great claims around reports and breaking news, journalists don't talk about writing articles and rarely talk about writing reports. Journalists write stories, usually starting from a report about an event but filling in background events and surmising possible future events.

So an article written around the time of Mr Huhne's resignation would look less like this:

The average piece of journalism is 10% reporting new facts and 90% repetition, insinuation and supposition where correlation and causation between events are never made explicit. Events from the storyline are hand picked and stitched together with a thin thread of causality. Often it's enough to just mention two events in close proximity for the connections between them to be implied. The events you choose to mention and the order you mention them in gives the first layer of editorial spin.

And the claims you choose to make about an event and its actors are the second level. If there's a female involved and she's under 35 it's usually best to mention her hair colour. "Bisexual" scores triple points. We know what we're meant to think.

The Daily Mail took insinuation to new heights with the collapse of Ms Pryce's first trial, printing a "story" about the ethnic make-up of the jury telling its readers:

Of the eight women and four men on the Vicky Pryce jury, only two were white - the rest appeared to be of Afro-Caribbean or Asian origin.

The point they were trying to make and how the appointment of a jury of certain skin colour might have led to the collapse of the trial was left as an exercise.

Sports journalism seems particularly attracted to insinuation and supposition. Maybe it's because their events (and sometimes even the outcomes of those events) are more predictable than in most other news whilst the actual facts are mainly locked inside dressing rooms and boardrooms. But Rafa Benitez getting slightly stroppy in a news conference turned into, "Rafa out by the weekend, Grant to take over until the end of the season and Jose to return" headlines by the next day. None of which turned out to be true. Yet.

As Paul pointed out, the article as repetition of storyline and makeshift crystal ball wasn't always true. In the past newspapers printed many small reports per page. This isn't the best image but was the best image I could find without rights restrictions: 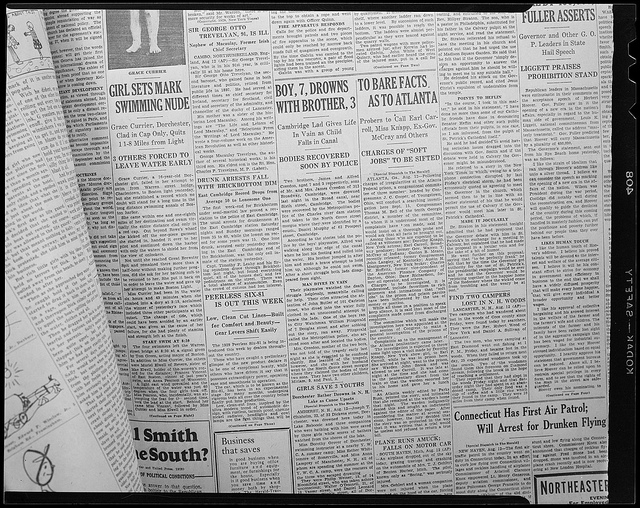 Neither of us knew enough about newspaper history to know when this changed or why it changed. Presumably there are good business reasons why articles stopped being reports and started being stories. We guessed that it might have been due to falling paper and printing prices meaning more space to fill but without evidence that's just insinuation too.

To an outside observer the constant re-writing of "background" seems tedious to consume and wasteful to produce. Especially where the web gives us better tools for managing updates, corrections and clarifications. Maybe it's because most news websites are a by-product of print production where articles are still commissioned, written and edited to fill a certain size on a piece of paper and are just re-used on digital platforms. But even news websites with no print edition follow the same pattern. Maybe its partly an SEO thing with journalists and editors trying to cram as many keywords into a news story as possible but surely one article per storyline with frequent updates would pick up more inbound links over time than publishing a new article every time there's a "development"? It seems to work for Wikipedia. (Although that said, Google news search seems to reward the publishing of new articles over the updating of existing ones.) Or maybe it's all just unintentional. Someone at the meeting (I forget who) mentioned "lack of institutional memory" as one possible cause of constant re-writing.

An aside on television

Television producers seem to feel the same pull toward repetition: this is what we're about to show you, this is us showing it, this is what we've just shown you. I have a secret addiction to block viewing (I think the industry term is binge viewing) episodes of Michael Portillo's Great British Railway Journeys but for every 30 minute episode there's 10 minutes of filler and 20 minute of new "content".

Interestingly the Netflix commissioned series assume binge viewing as a general pattern so have dropped the continuity filler and characterisation repetition and get straight into the meat of the story. Nothing similar seems to be happening with news yet but I'm an old fashioned McLuhanist and believe the medium and the message are inextricably tied so maybe one day...

Over the last couple of years there's been much talk of data journalism which usually involves scanning through spreadsheets for gotcha moments and hence stories. It's all good and all helps to make other institutions more transparent and accountable. But journalism is still opaque. I'm more interested in journalism as data not because I want to fetishise data but because I think it's important for society that journalists make explicit their claims of causation. You can fact check when and where and who and what but you can't fact check why because you can't fact check insinuation and supposition. At the risk of using wonk-words "evidence-based journalism" feels like a good thing to aspire to.

I'm not terribly hopeful that this will ever happen. If forced to be explicit quite a lot of journalism would collapse under its own contradictions. In the meantime I think online journalism would be better served by an article per storyline (rather than development), an easily accessible edit history and clearly marked updates. I'm not suggesting most news sites would be more efficiently run as a minimal wiki, pushing updates via a microblog-of-your-choice. But given the fact that if you want to piece together the story of Mr Huhne you'll have more luck going to Wikipedia than bouncing around news sites and news articles... maybe I am.