Last Wednesday was the second BBC Data Day. I didn't manage to make the first one but I did end up chatting afterwards with various BBC, ODI and OU people about the sort of data they'd like to see the BBC release. Shortly afterwards I sketched some wireframes and off the back of that was invited to talk at the second event. Which I also didn't manage to make because I was at home, ill and feeling sorry for myself. In the event Bill stepped in and presented my slides. These are the slides and notes I would have presented if I had managed to be there: I'd like to talk about open data on the web, what it's for and in particular how it enables transparency to audiences across journalism and programme making. 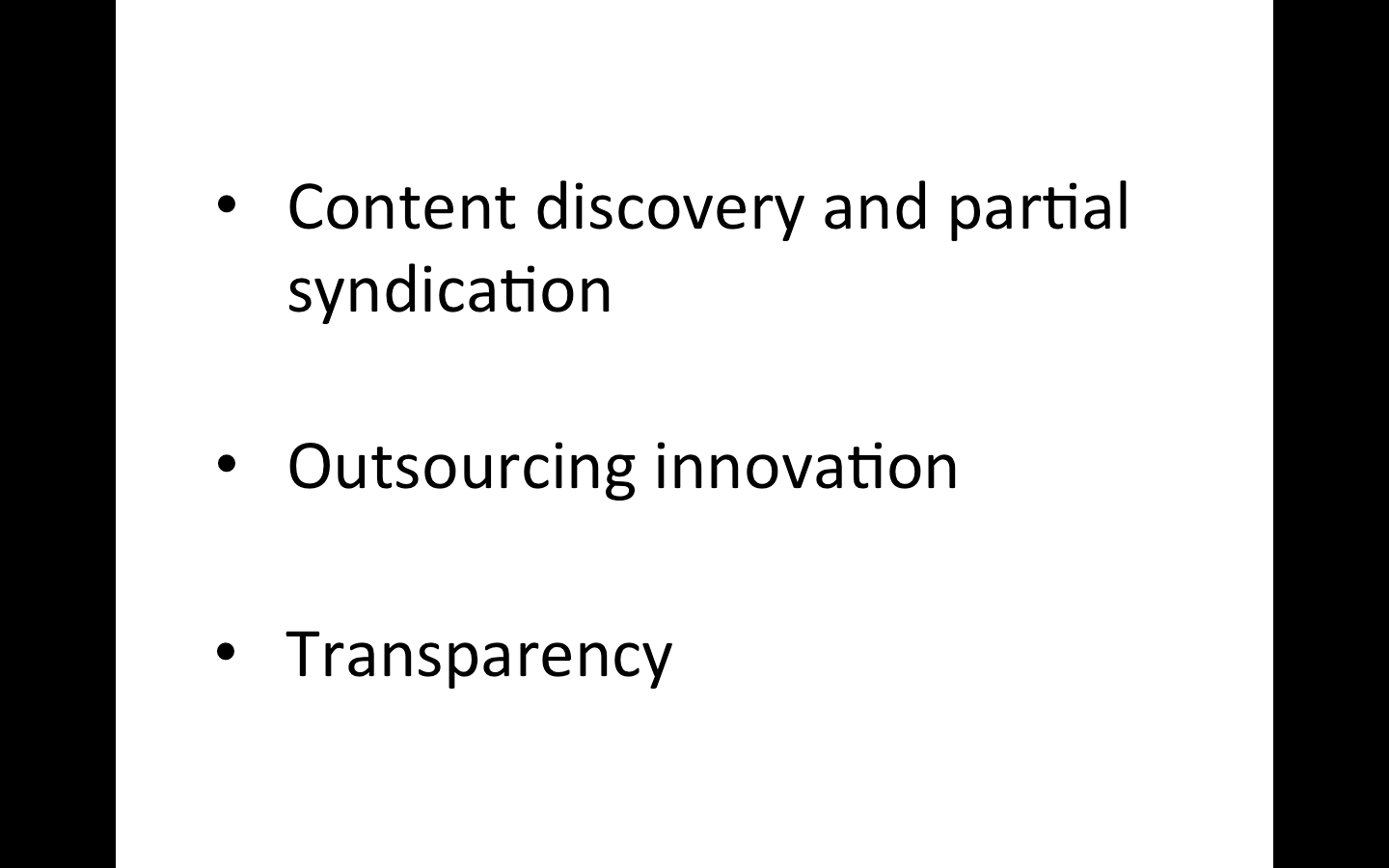 So why publish open data on the web? Three common reasons are given: 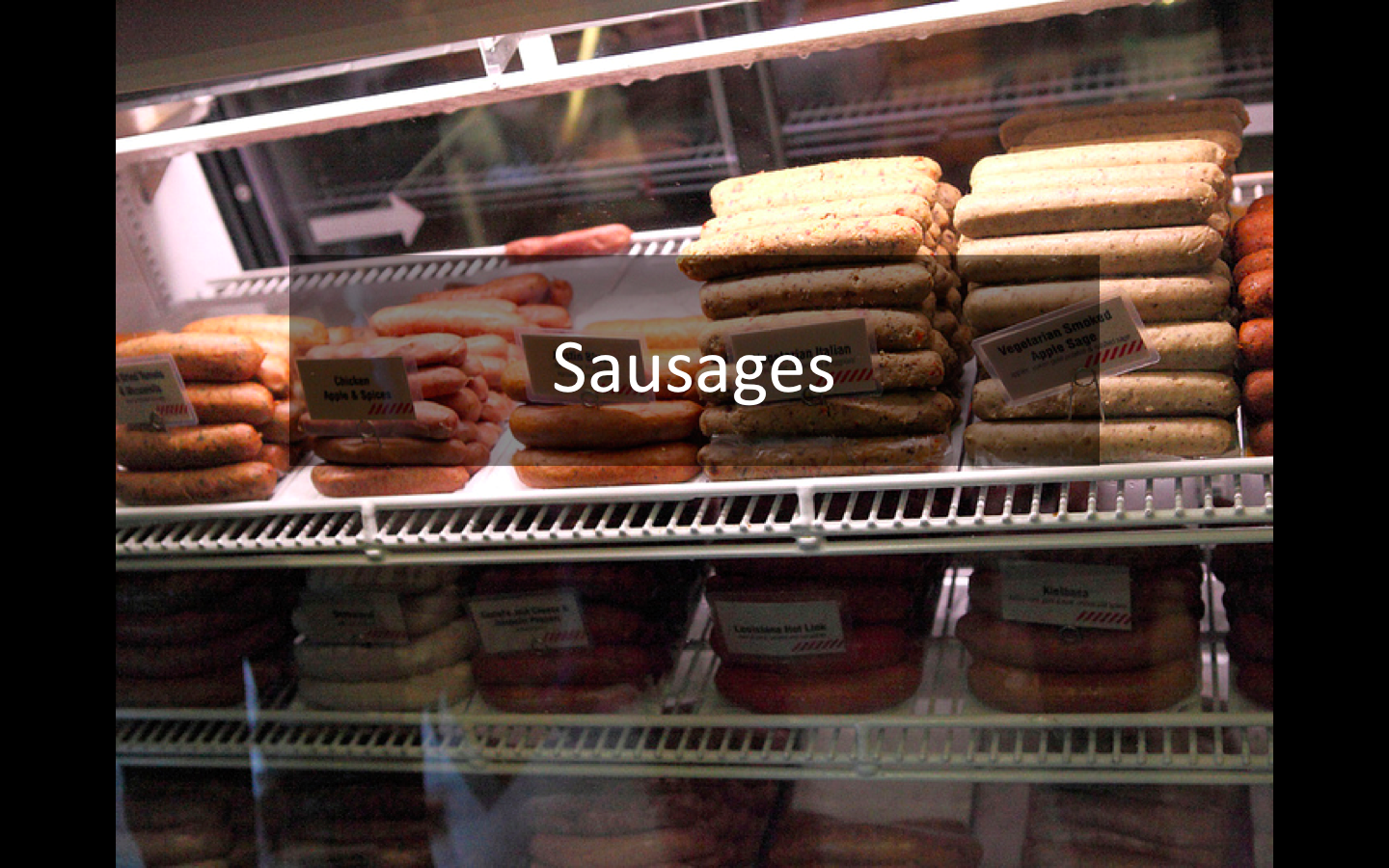 So sausages. The BBC already publishes some "open" data but that data only describes the end product, the articles and programmes, and not the process. 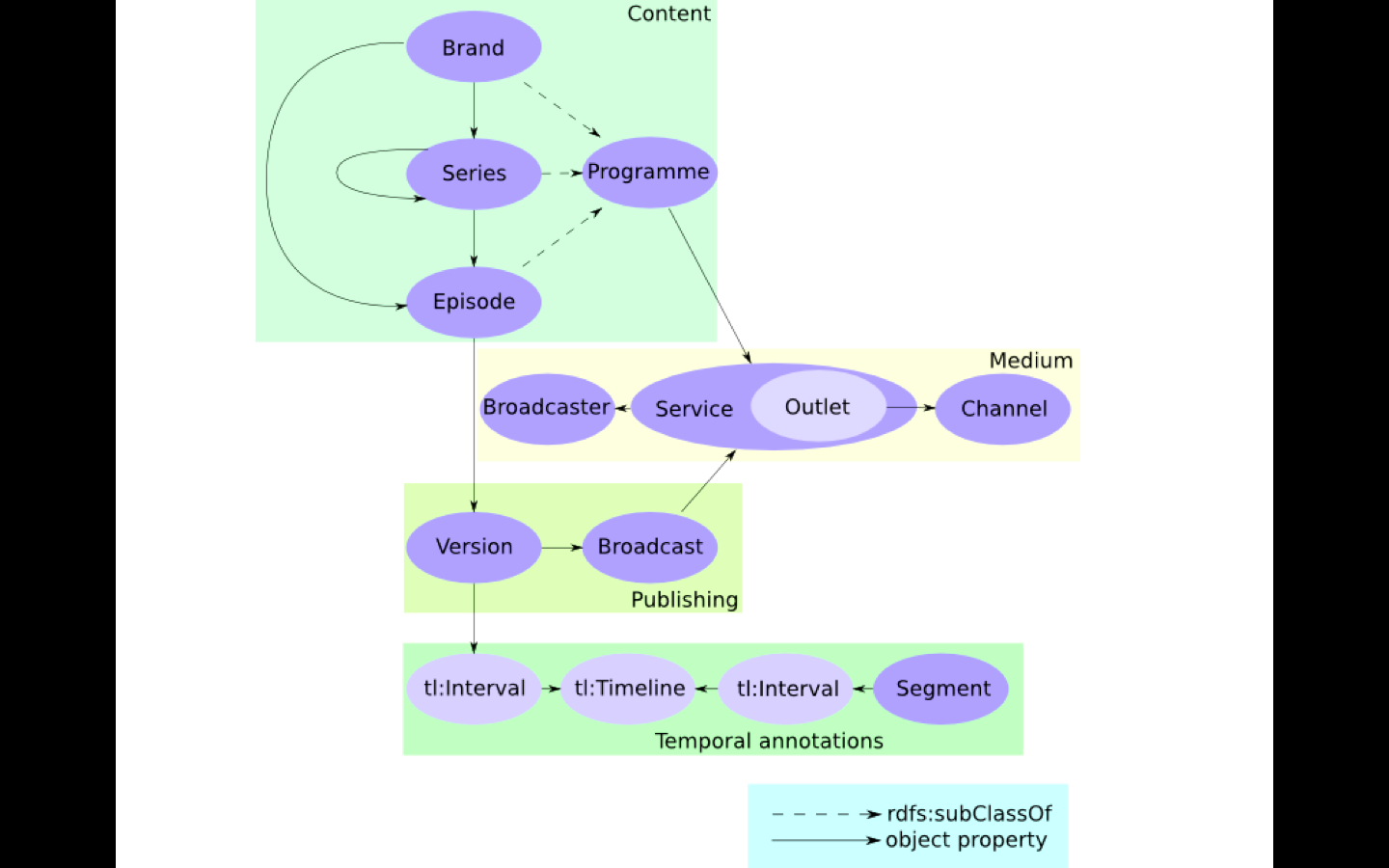 This is the Programmes Ontology. It shows the kinds of data we publish about all BBC programmes.

There are programme brands and series and individual episodes and versions of those episodes and broadcasts and iPlayer availabilities. The kind of data you'd need to build a Radio Times or an EPG. Or iPlayer. And this is the brand page for Panorama. Ask for it as data and you'll get... Again a brand with episodes with broadcast etc 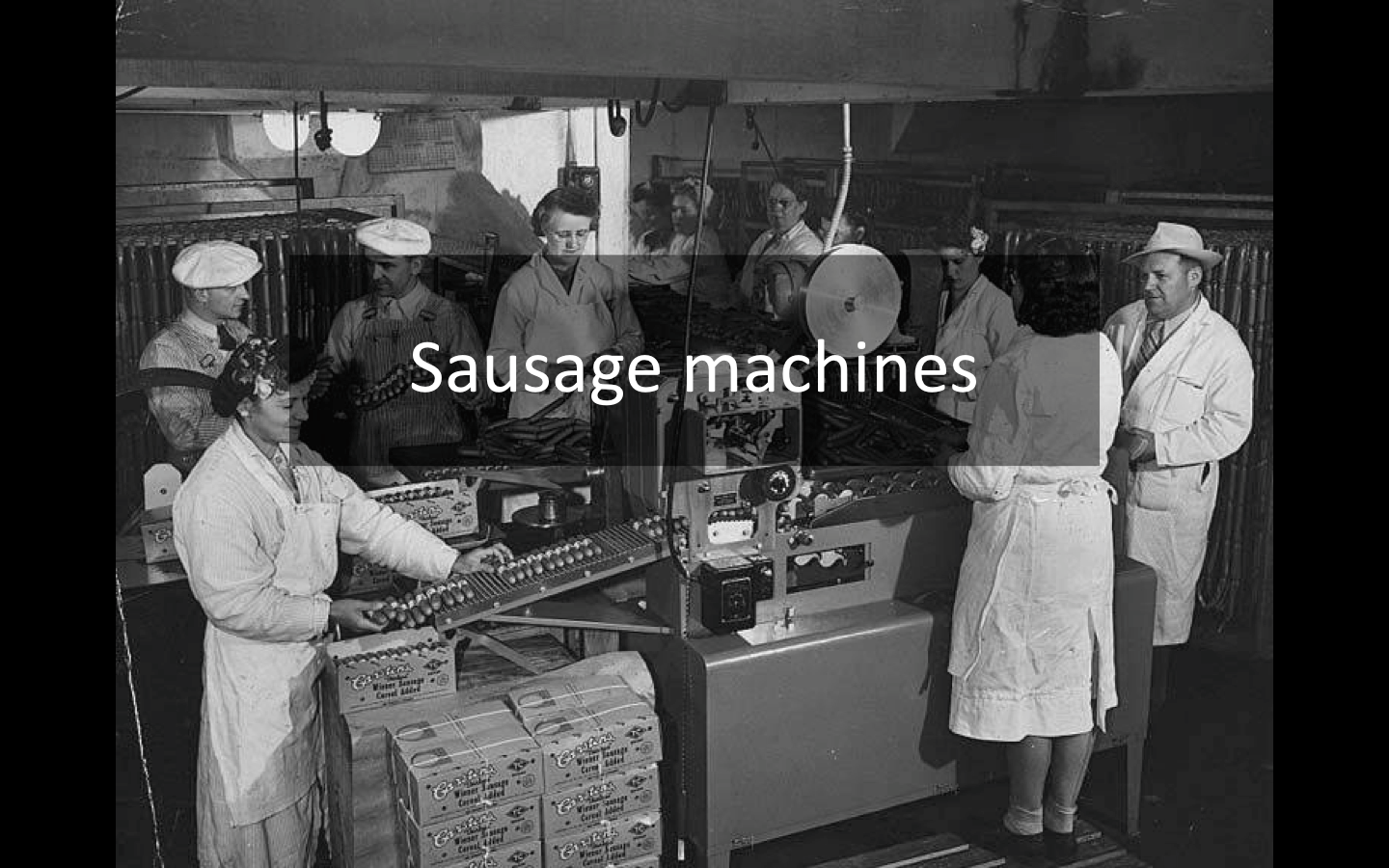 What's interesting is what isn't there. What goes on in the factory before the sausages make it to the shelves. A couple of weeks back there was a George Monbiot piece in the Guardian bemoaning the fact that BBC programmes often didn't include enough background information about guests on current affairs programmes. Particularly in respect to connections with lobbyists and lobbying firms.

As a suggestion: every contributor to BBC news programmes should have a page (and data) on bbc.co.uk listing their appearances and detailing their links to political parties, NGOs, campaigning groups, lobbyists, corporations, trade unions etc. Away from programmes what would transparency look like for online news. The Guardian is the most obvious example where clarifications and corrections aren't hidden away but given their own home on the website. And the articles come with a history panel which doesn't show you what changed but at least indicates when a change has happened.

The Guardian's efforts are good but not as linked together as they might be. Unlike Wikipedia. This is the edit history of the English Wikipedia article on the 2014 Crimean Crisis. Every change is there together with who made it, when and any discussion that happened around it. And every edit can be compared with what went before, building a picture of how the article formed over time as new facts emerged and old facts were discounted. I didn't manage to attend last year's data day but I did end up in the pub afterwards with Bill and some folk from the ODI and the Open University.

We talked about the kind of data we'd all like to see the BBC release and it was all about the process and not the products. The sausage factory and not the sausages.

We made a list of the kinds of data that might be published and it fitted well with how the BBC likes to measure its own activities: Reach, Impact and Value. These were the wireframes I made following last year's pub chat.

They were intended to sit on the "back" of BBC programme pages; side 1 would show the end product, side 2 would be the "making of" DVD extra, the data about the process.

Headline stats for every programme would include total cost, environmental impact, number of viewers / listeners across all platforms and the cost per viewer of that episode.

Programmes would be broken down by gender split of contributors and their speaking time. 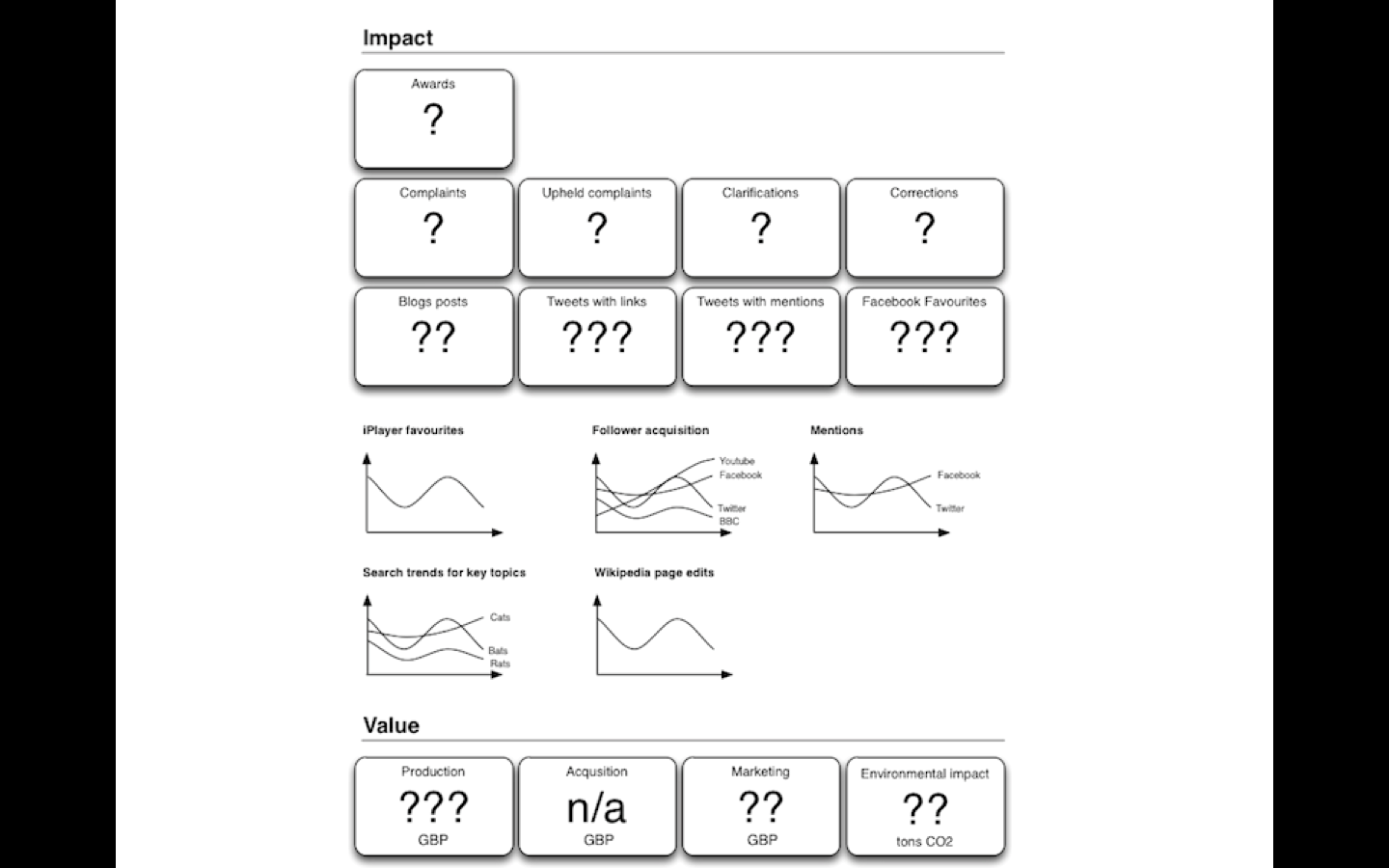 Impact would list awards, complaints, clarifications, corrections and feedback from across the web.

All of this would be available as open data for licence fee payers to take, query, recombine, evaluate and comment on.

Having made the wireframes I chatted with Tony Hirst from the OU about how we might prototype something similar. We came up with a rough data model and Tony attempted to gather some data via FOI requests. 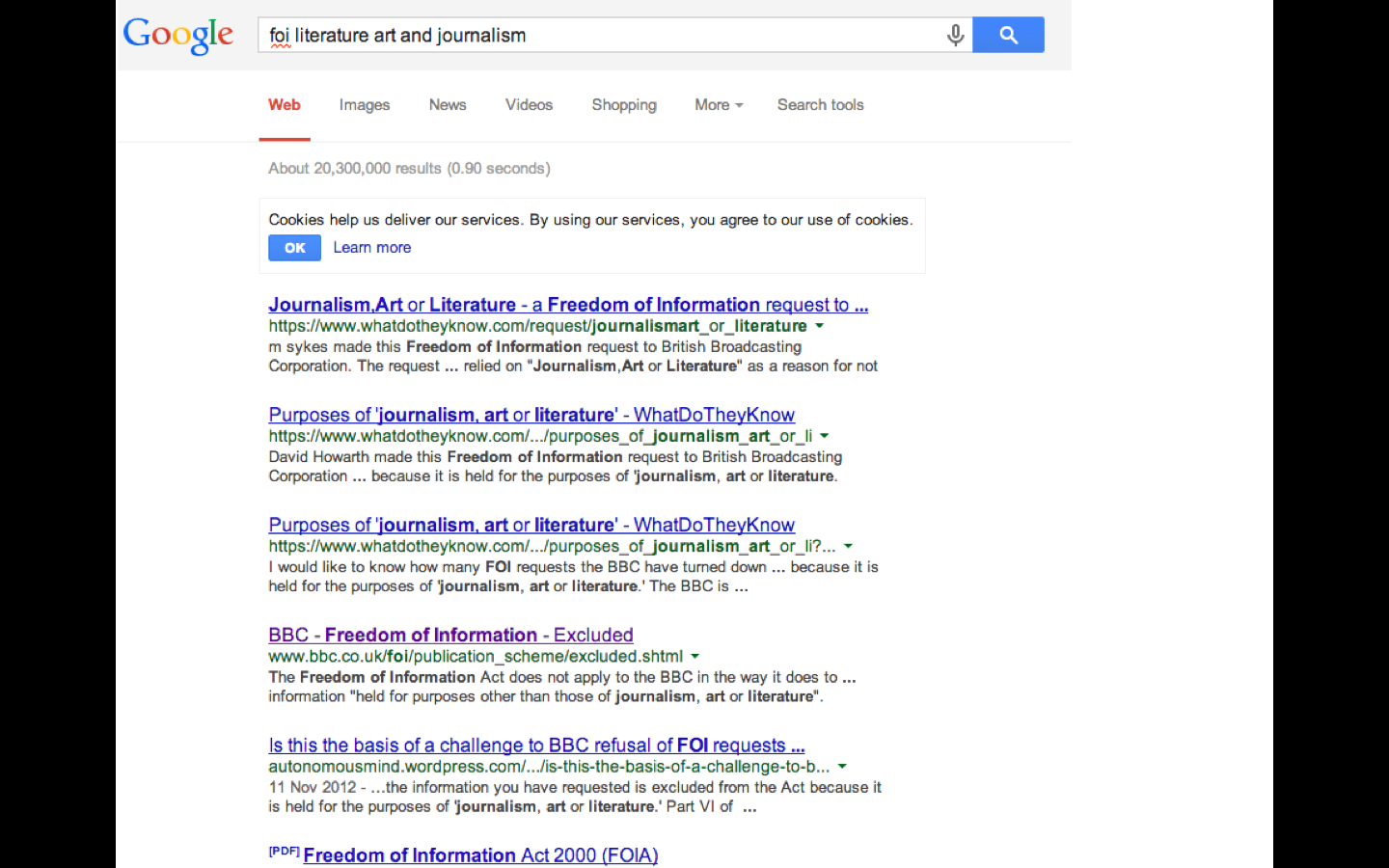 Unfortunately they were all refused under the banner of "purposes of journalism, art or literature" which seems to be a catch all category for FOI requests marked "no".

Google has 20 million results for the query "foi literature art journalism", around 10 million of those would seem to relate in some way to the BBC.

And the public would benefit from "journalism as data" at least as much as from "data journalism".